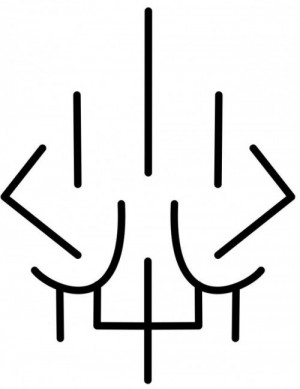 In a previous essay I explained how the idea that Satanism must be selfish comes from LaVey incorporating the philosophies of Ayn Rand into his variation. The basic idea, however, is neutral. It is just the rebellion and opposition to arbitrary authority of the adversarial archetype, as well as the individualism of the Left-Hand Path that are definitive. Everything else is just part of a variation.

Some people have said that the Left-Hand Path is selfish because it is focused on the self. That is given as the reason why Satanism is selfish regardless of whether or not one accepts Randian Objectivism. It is stated, that at the very least, those who are not selfish are on the Right-Hand Path, rather than the Left-Hand Path. This is a misconception. The external may or may not indicate which path one is one.

It is the Right-Hand Path that is concerned with the external. The Left-Hand Path is neutral on that. Therefore, one cannot easily determine the path of another—at least not without understanding the motivations in question. The Left-Hand Path looks within. It is about understanding the self, and being directed by one’s own will. The Right-Hand Path is about surrendering one’s will to something external, and then joining with that. In this way, one would be directed from without, rather than from within.

It is all about the desire of the will. If one is directed from there, without blindly accepted external influence, then one is on the Left-Hand Path. Whether one is a famous philanthropist, or the most selfish jerk the world has ever known, it matters not. It is about one’s will alone directing the individual to be one or the other of those extremes. Likewise, if one is influenced from without, so as to conform to the ideal of another or others, then one is on the Right-Hand Path. Once again, it is irrelevant whether this motivates one to be generous or selfish. Only the source of the motivation matters.

This may sound like some sort of new-age thing. That is because new-age nonsense is cobbled together from ideas lifted from eastern religions. Eastern religions are mostly Left-Hand Path. I can assure you that there is no mystical bullshit involved here. It is just that the mainstream, western, exposure to the Left-Hand Path comes from all that hippie humbug. To understand this, one must forget the past associations, and let Left-Hand Path philosophy stand on its own.

The Left-Hand Path is about looking within, and letting the force of one’s will, motivate one’s actions. That is just one thing though. It is also about the discovery of self. Getting to known yourself, who you are, and what you are about, is an important part. Another part is acceptance. You must accept who and what you are, or work to change that.

Change brings up the topic of self improvement and personal accomplishment. Improving the self and driving oneself to achievement are the Left-Hand Path way of life. One must always continue becoming a better person, and achieving what one wills.

Fulfillment of the self is another major part of this. This has to do with what one desires. It can be mental or physical. It only matter that it is of the self. It can involve external actions, but dose not have to. It only matters that this is directed from within.

The question has to do with reasoning. Why is one selfish? Why is one generous to others? Doing what is directed from the will within, makes it Left-Hand Path. Conforming to what one thinks their path must be, is Right-Hand Path.

In conclusion, bringing one’s path into this is just as irrelevant as invoking Satanism itself. Selfishness is not definitive. It is optional. It depends on what is within, which in turn determines whether or not one is drawn to the Rand-inspired elements of Satanism codified by Anton LaVey, or the more egalitarian elements codified by Damien Ba’al. Individualism and the adversarial archetype are the elements they both have in common.